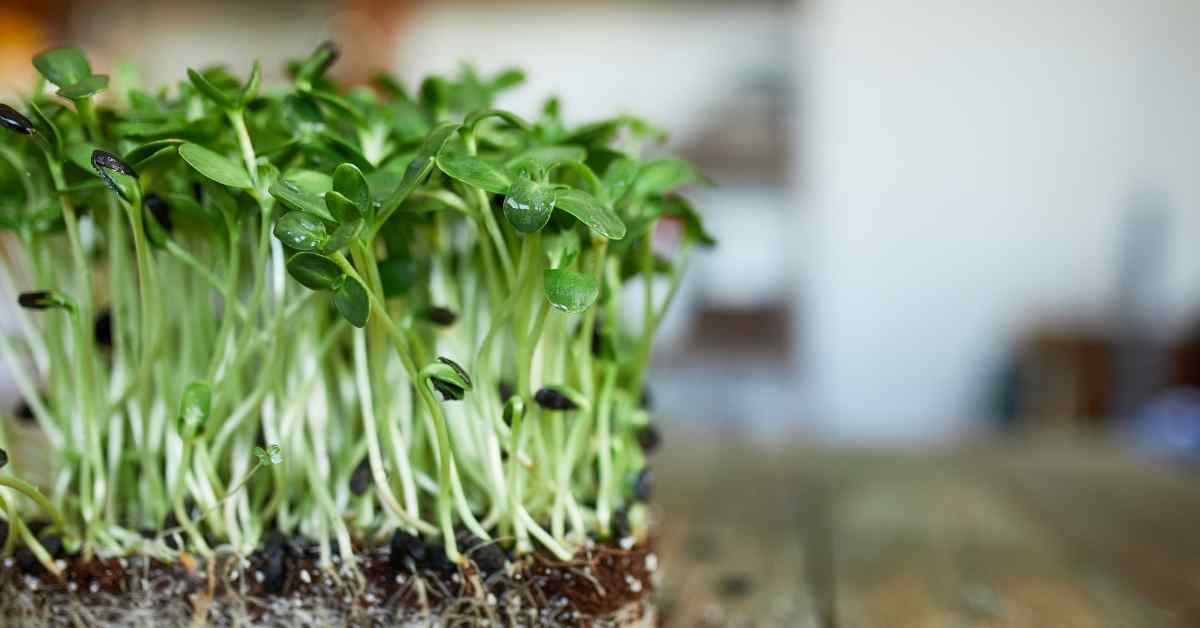 Microgreens, contrary to very popular belief, are not the same things as sprouts.

All plants start as a seed. Think of a seed as an embryo. Seeds are embryos that come with a protective shell, which is called the seed coat, and in it contains all the wonderful nutrients and vitamins that the plant inside needs to burst out of that coating.

This is why the seeds of any fruit or vegetable usually has the highest concentration of nutrients.

Between the protective coating and the embryo is the endosperm, which wraps around the embryo and gives the little baby nutrition.

Then, comes sprouting. Sprouts are germinated seeds. What this means is that the “germ” of the seed awakes from its slumber, and becomes a real, live plant. Using the nutrients stored in the seed, the embryo develops its stem.

Look at a bean sprout: that’s the infant plant’s stem!  If you let a sprouting seed grow, then it eventually becomes a full-grown plant. But until then, what you have are crunchy, refreshing sprouts.

Oftentimes, people germinate sprouts in water. To ensure that they do not grow mold, those seeds are rinsed once or twice a day. Sprouts grow quickly and can usually be harvested in about four to six days. Virtually no light and nutrition is needed for sprouts to grow.

They are packed with fiber, protein, essential nutrients, and enzymes. Sprouts are both tasty, and healthy. Sprouting seeds do require a certain amount of humidity, a condition in which bacteria thrive in.

Microgreens are the result of the next growth stage called the cotyledon growth stage. This is when the first couple of leaves on the plant appear and the “cotyledon” usually becomes the plants’ first set of leaves. They’re formed in the seed, and function in the same way as leaves do when it comes to photosynthesis—both convert light energy into chemical energy that the plant will use to grow.

The leaves and stems can generally be eaten, and the seeds are started in soil or peat moss, as opposed to in water like sprouts. The soil is what gives the plants nutrients. They take longer to grow, around one to three weeks, depending on the plant. The seed, unlike sprouts, cannot be eaten as it’s in soil.

Microgreens also require lots of light and good air ventilation, just like when you grow any plant in- or outdoors. Microgreens shouldn’t be confused with baby greens. Baby greens don’t really fit into any growing stage in particular; they’re the leafy plants that are harvested before they are mature and thus, they are the first set of true leaves but not yet matured.

Microgreens carry the most flavor (versus the younger sprouts and the older baby greens. Many studies have also shown that, depending on the variety, microgreens are more concentrated in nutritional value than their mature counterparts.

Sprouts, microgreens and the kitchen

There are as many ways to use your microgreens as you can imagine, but a few tried and true uses will help you make the most of your greens.

Buckwheat greens can be cooked like spinach and make an interesting, slightly sour addition to many egg dishes.

Brassicas (cabbage, kale, mustards) are perfect for tossing with pasta just before
serving. The heat wilts them slightly but these items retain their pleasant crunch.

Using microgreens to augment the flavors of meats or other main dishes is easy if you think of them as similar in flavor to their adult counterpoints.

Kale combined with pesto noodles and grilled veggies makes a savory dish. Mustards are terrific on chicken or soy-based dishes.

Radishes add spice to any dish.
Microgreens can also make a fantastic dressing particularly the spicier options like mustards.

Try chopping the greens finely and mixing with oil and vinegar. Or use your blender to make a smooth dressing with yoghurt, microgreens and a little salt.

Many microgreens make adding nutrition to smoothies simple and tasty.
We recommend using some of our milder options to start and experimenting with more robust flavors as you become familiar with them.
Broccoli, cabbage, kale, tat soi and sunflowers all add high vitamin and mineral
content to your smoothie with a mild flavor.